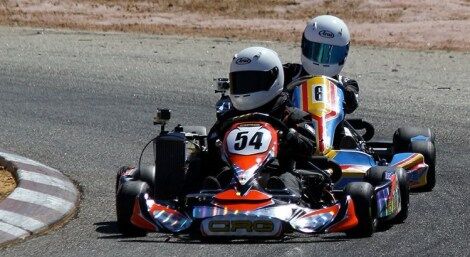 The main differences with J-Max compared to other classes are that the throttle response in a Rotax engine is much greater than that of a Yamaha J engine, and that if you floor the throttle too early when pulling out of a corner, the engine will ‘die’ and you will lose a lot of acceleration.

In the first race I started on pole. At the start I lost a place and dropped to second. We were racing along like a train, until on the third lap I made a move on the leader. Unfortunately I floored the throttle too early, and dropped back down to second. I was chasing right behind the leader for the whole race, and third was right behind me! It was very close racing, and I finished second.

In the second race I started in 3rd. At the start I stayed in third. For the first few laps I was right behind the leader and second place, unfortunately, after a couple of laps my chain came off – meaning I didn’t finish the race.

In the third race I started on pole. At the start I dropped to second. Once again I was right behind the leader for the first few laps, until I made a move to get into the lead. Lap by lap I steadily increased my lead. By the end of the race my lead had stretched to 2-3 seconds. Meaning that I won the race by a fair way!

In the final race I started in 3rd. At the start I jumped to second, because the pole sitter had an engine failure. I was right behind the leader, and 2 laps in I made a move, but at the next corner he got back through. It was a very close race, but I came out in second place, meaning I was second for the race, and third for the day!