The announcement comes off the back of an extremely successful test session with the team at Queensland raceway where Calan became acquainted with the car over approximately 70 laps in challenging conditions with the temperature at one stage reaching 40 degrees.

“To say that Calan impressed the team would be an understatement” said Team Boss Errol Gilmour.

“I am incredibly excited to have the opportunity to race Formula 3 with a team as professional as Gilmour Racing. I can’t wait to push myself at that level, in a national series across some of the best tracks in Australia” Calan said. “I know that this is going to be a great opportunity to take my racing to another level, and I am excited about the challenge”.

Calan’s sponsors have played a key role in making this possible. “I am very grateful to all of my sponsors for the support they give me. Without Truck Dealers Australia, ES2,  TWD, Edith Cowan University, Kingsway Community Bank Branch (Bendigo Bank), Impressions the Home Builder, Grand Toyota, Rvend, Fullworks Firesafety, Online Logistics Solutions and Focused Recruitment this opportunity would not be possible”.

“I would also like to thank Errol and the team at Gilmour Racing for the faith they have shown me in offering me this enormous opportunity”.

Calan’s first round of the championship is in only 5 weeks time at Sydney Motorsport Park January 13 – 15. 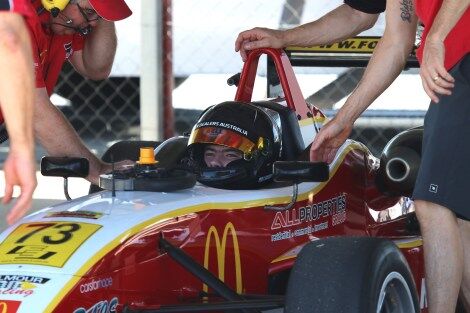